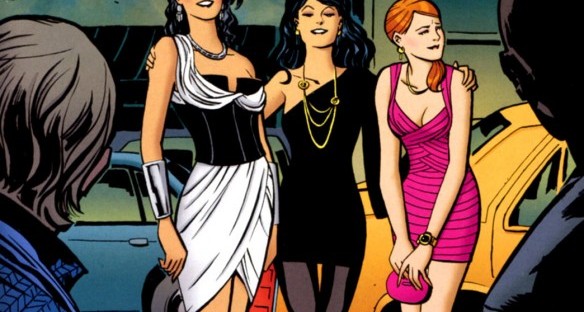 This article was originally written for Modern Myths, INC. and was posted on March 8, 2014. This is a reproduction for portfolio purposes.

Modern comic books have a problem: most artists just don’t know how to dress characters. Outside of spandex and capes, when characters are shown in street wear, there’s a sudden lack of creativity. Men wear t-shirt and jeans, with the occasional button-down shirt thrown on top.

Comics are monthly (and weekly) content, constantly changing and adapting to fit with a modern tone, but for some reason that tone doesn’t include how the characters dress. Even worse is when every single female character has the same dress code: crop tops and skirts. Almost like a uniform outside of costume, female characters in civilian guise often dress in the exact same style.

This would be fine if it made sense with the characters, but it frankly does not. Birds of Prey is a treasure trove of examples of all sorts of artists dressing a very diverse trio the same way: Helena Bertinelli was a school teacher, Black Canary was a take-charge martial artist, and Oracle was a tactician who didn’t suffer fools, yet they all dressed alike, and incredible “sexy” (especially for Ted Kord’s funeral, pencils by Paulo Siqueira).

Even when artists do

differentiate character’s outfits based on their personalities, there is a tendency for their clothing to trend towards looks that are hard to pull off in reality.  All of these artists are incredibly talented, but they seem to lack a sense of what a character’s style would look like.

Other artists avoid showing heroes in street clothes all together. But often, the most compelling superhero stories come from stories where the heroes aren’t wearing capes, but are being humans.

Take Brave and the Bold #33: the story follows Wonder Woman, Zatanna, and Batgirl without their costumes, as they have a girls night out. The fun, and somewhat emotional, tale is complimented by critical darling Cliff Chiang’s artwork and, beyond that, his sense of fashion. Chiang dresses each of the women in a modern, chic look that compliments their personality and character history (Diana wears a Grecian-inspired number, Zatanna has a showy black dress, and Babs wears a youthful pink dress–this issue being a  final celebration in old DC continuity, set right before the Killing Joke).

Conner, too, embraces fashion complimenting a female character. Still dressed to look “sexy,” Kara’s outfit in Supergirl #12 embraces her attitude, but also plays a bit of a role reversal, featuring civilians dressed up to look like superheroes. Embracing the medium with gentle mockery, Conner makes issue visually fun. Each page brings new clothing and style for each character, whether they are a featured player or a bit character.

Superhero comics are always trying to stay up-to-date with new storylines and reinvented characters, but the thing that really needs to be updated in comics are superhero street clothes. Drop the tank tops and belly shirts, and add some style and flair (as long as it makes sense for the character).